The Ultimate in Dad Rock – Anarchy Reigns Give Free Track Away!

It’s never too late – or so we’re always told. Rare is the occasion when we still have the gumption, time or money to act out our wildest dreams but Hitch is the man many have dreamed of being. After a successful career in pharmaceuticals (not in the traditional rock n roll sense!), Hitch (named after Rutger Hauer’s character in the much-overlooked The Hitcher movie) has assembled his dream team of hard rock talent and is gearing towards a May release of his debut album, Anger Issues. 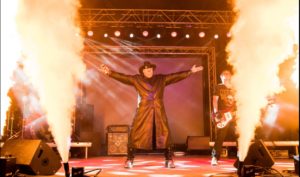 Named Anarchy Reigns, Hitch’s band is an amalgam of classic British metal (Judas Priest are an obvious influence) and more recent industrial-tinged rock (Rammstein etc). Now onto their second single release, Hypocrisy, which, with typical humour and contrariness, he is giving away for free (link below),  he has already performed in front of masses of fans on a beach-held gig on a Cyprus beach, entering the stage via his spaceship, New Dawn. Yep, you’ve read that right.

Your passport to free Anarchy! http://www.anarchyreigns.net/form1.html

With over 220,000 organic likes on Facebook and with an average post garnering 1000 shares, they have instigated the formation of an army of followers who have bought into Hitch’s acts of minor anarchy – disobeying “keep off the grass signs”; carved Halloween pineapples; mislabelled signs – subtle insurrection to a soundtrack of devil horn flicking rawk! As the first proper taster of the album itself, it’s sure to galvanise an already loyal following into becoming a worldwide force!

Watch the video to Hypocrisy here:

Featuring the inimitable Hitch on vocals; Eddy C on keys; Wally Brewer on bass; Andy Pope on drums, and Joedy Rose on extra guitar fury, they are a band you can immediately fall in love with, have fun with but also share in their rather more serious moments where they tackle some of the world’s most pressing issues, whether they be the failings of the so-called democratic system or injustice happening just around the corner from you. 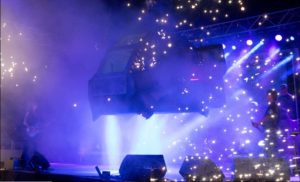 Fundamentally, despite the anarchy and excess, Hitch is still a dad. In his own words:

“My youngest daughter Katie would prefer a normal Dad. She has her ticket booked for Jupiter when the album is launched as she wants to be as far away as possible”

Anarchy Reigns bring fun and brains back to rock music, with their dedicated following snapping up their prized limited-edition merchandise and eagerly awaiting the notoriously unpredictable Hitch’s next move. Anarchy Reigns arrive just when the world needs them most. Your new heroes; your new inspiration; your new favourite everything. Long live Anarchy Reigns!

The Return of Unique Gifts for Christmas

Singing Soldiers: Fighting the Effects and Stigma of...

“Voices From The Sun” by The Dualers is...