Home Business Where Do You Go Once You’ve Conquered the World?
BusinessLife StyleNews

Where Do You Go Once You’ve Conquered the World?

On the eve of the new NFL Season kicking off, some of the world’s most revered and heavily-armoured athletes will be gearing up to appear in front of vast crowds and aim to become among the fabled few who will for the rest of their lives have their name prefixed with the words, “Super Bowl Winner”. It has become a trend among players to retire early, certainly in comparison to other sports – mid-30’s for soccer and basketball players is the norm, whilst sports such as golf, even boxing, can see players continuing until only personal pride in their dwindling rankings pushes them to a quieter life. American Footballers are now retiring as an average at around 30 years of age, with some players throwing in the towel in their mid-20s. The money-spending possibilities may prove irresistible to some, with a litany of injuries being one of the other options on offer but what exactly does a sportsman do when their career comes to an end?

Coaching is the first port of call for many. Stick with what you know, in an environment you have become accustomed to for most of your life – indeed, for some, the fear of leaving this arena is unthinkable – they simply haven’t known anything else. For others, a life in the media with still at least a big toe in their sport is preferable, though the scrutiny of their performance often exceeds that of their former career, the word “expert” leading many to viciously judge their every word. In short, though the income may have been great, the options are far less so. In many respects abandoned by the sport which had become their life, it leaves many cast adrift, with hundreds of players every year finding them with a vast chasm ahead of them with no-one to explain what gets written in the next chapter. 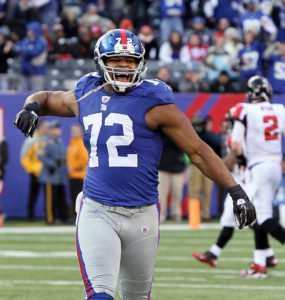 Osi Umenyiora is one of only five British-born American footballers to have won the Super Bowl. FIVE. Crazy, right? His playing career was spent almost exclusively at the New York Giants, for whom he was playing for in the 2008 Super Bowl final against the seemingly invincible New England Patriots, who had gone the whole season undefeated. The result is still considered one of sport’s greatest upsets and Osi played no small part as one of the game’s top defenders. Easing himself into media commentary at this stage, when his eventual retirement came in 2015, he had already taken care of any immediate concerns but this wasn’t enough. Osi has become a former sportsman who still harbours goals in other arenas.

Founded in partnership with his wife, ex-Miss Universe Leila Lopes, The Uprise Music record label is a venture many sportsmen wouldn’t consider, nevermind attempt. Using their person music tastes to combined sounds from South America, specifically the infectious funk sounds from Brazil, to more readily recognisable hip-hop sounds from America, whilst UK grime and urban pop give a truly contemporary edge. Their artists at this fledgling stage include Nigerian/British hip-hop guru, Andi McErnest, whose laid-back style is effortlessly cool, while Grace Rhodes’ chart-friendly beat-heavy pop sound have all the hallmarks of a label far further into its life. Osi Umenyiora is gearing up to be the first Super Bowl winner to be best remembered as a music industry maverick.