Rock and metal has long enjoyed the reputation of having a community mentality: not just between the bands and their fans but between the fans themselves. Rockifi knows this and turns it to eleven, becoming your home to connect with other fans of all forms of rock, metal and alternative music before, during and after gigs. Whether you’re a Maiden fan from back when they started or you’re looking for somebody to talk to about your favourite obscure noiseniks, you can connect with them whatever the time, whatever the place for free with Rockifi.

Rockifi are celebrating the launch of their new site by giving away a pair of 3-day camping passes to Download UK plus some other Download swag for the runners up! Simply sign up to Rockifi.com and post your favourite song from a band performing at Download on the Rockifi Download festival page.

The winning profile will be picked by legendary former Ramones drummer, Richie Ramone, and announced on the 31st May. Winners will be notified via email and names published on Rockifi’s social channels.

Rockifi is a new way for fans of Rock and Metal to connect before, during and after a gig. Anti-corporate, made by the fans for the fans, it allows you to connect with like-minded Metallers before the gig (plan your strategy to get to the prime spot at the gig over a drink or two; arrange carpooling); during (meet up with those social media mates you’ve never met in person; take photos and videos); and after (share photos, setlists, plan your next assaults!) Members can sign up, create a Rock profile, get a ‘Rock’ rating with other members, buy tickets, find rock comrades to hit the town with (can’t find a friend to go see your fav obscure South American thrash outfit when they’re in town? Problem solved!) – the only limits are your imaginations!

Starting the revolution in the UK and with expansion to the US and Europe planned imminently, Rockifi was established in Edinburgh, Scotland and sought to find a way to bring together the music world’s most dedicated, fanatical, loyal audience – the rock and metal fraternity. Rockifi is EXCLUSIVELY for Rock fans – no other genre fans need apply. It doesn’t matter how obscure your favourite bands are, Rockifi will hook you up with like-minded souls. 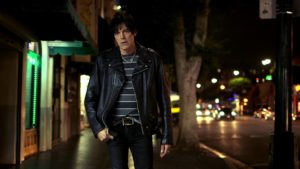 Who better to be Rockifi’s figurehead than legendary drummer and mayhem magnet, Richie Ramone!? Richie immediately understood the whole ethos of Rockifi and their vision of empowering the Rock and Metal communities to take control and make fans a more integral part of the industry. He agreed that most ticket companies are more concerned with selling tickets as quickly as possible with no real care as to where they end up (second hand ticket market sites usually). The experience, the build-up and the days after an awesome Rock show have been neglected to say the least and Rockifi is the starting pistol to shaping the future of the Rock, Metal and Alternative music both online and down in the pit.

JAMERICAN Combines the Best of both Worlds with...

The Jimi Hendrix of Folktronica Releases Magpies on...

The Hair-Raising Fall and Rise of The Bald...

DAN Defies Stereotypes and Disability to Aim for...

Alex Scheuerer – Between Heaven and Earth