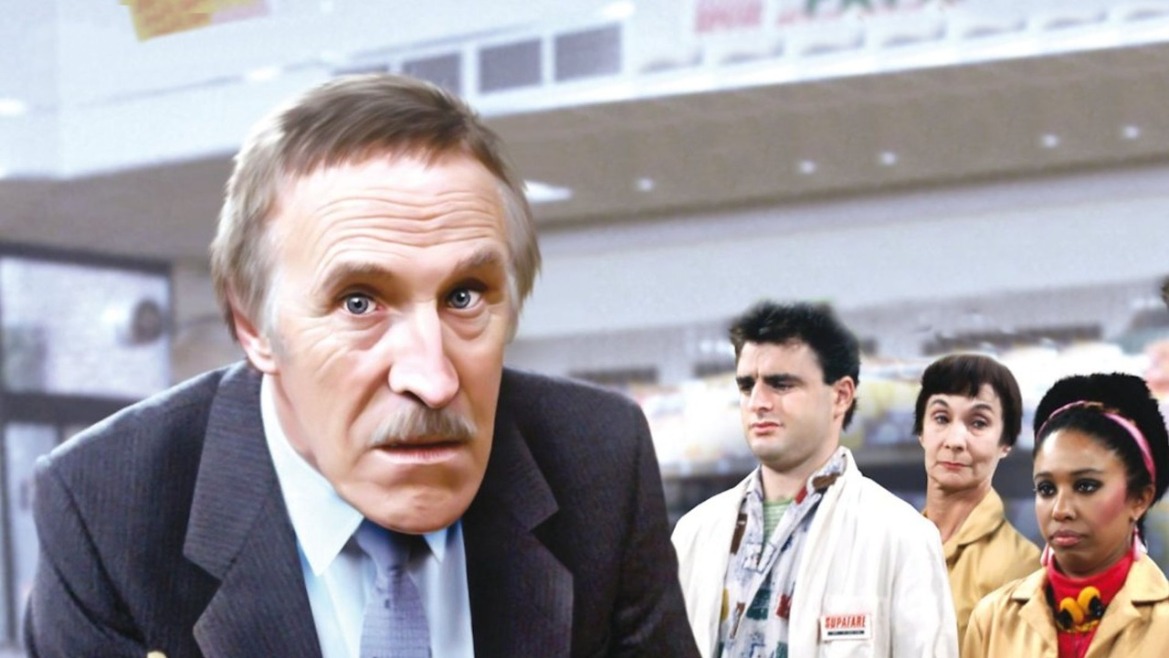 For the ITV network, situation comedy was always something of a challenge. While not the comedy wasteland that is has sometimes been made out to be (the network did, after all, have the likes of Rising Damp), the various regional broadcasters that made up the network would often struggle to come up with anything that raised more than a passing chuckle, and their sit-coms were more often than not seen as down-market efforts that are rarely remembered as fondly as their BBC rivals. Even at the less sophisticated end of the market, they came off as second best – the BBC had Are You Being Served and ‘Allo ‘Allo; ITV had Love Thy Neighbour and Mind Your Language. And by the mid-1980s, even those shows were starting to feel as though they were part of a lost golden age, compared to the long-forgotten output that followed, a gradual decline into immediately forgotten mediocrity until, in 2019, the network finally threw in the towel and suggested that is viewers want a good laugh, they should instead tune into Coronation Street.

If we were to seek out a ground zero point at which the ITV sit-com gave up the ghost and simply stopped trying, then Slinger’s Day, made between 1986 and 1987, might be as good a place to start as any.

Rather like a televisual version of the 4-minute warning, the Thames TV indent heralds the imminent destruction of everything we hold dear. Slinger’s Day started life as Tripper’s Day, the trials of a Northern store manager in a London supermarket. It proved to be Leonard Rossiter’s final TV role and was loudly booed out of the room by critics nationwide, an utterly undeserved epitaph for the beloved actor, who died midway through filming.

Undeterred by losing their lead and failing to see this as a sign from an angry God, the creators and Thames sought a new star for their vehicle, fully confident that their scripts and concept would win over the naysayers and become a ratings hit. You can see their point. There is surely enough material in a sit-com about a supermarket to appeal to the masses, with universally recognisable characters and situations that would fit perfectly into ITV’s prime-time schedule. It was clearly important that the right star was chosen to fill Rossiter’s inestimable boots.

It is to Bruce Forsyth’s immense credit that he chose to do his dying onscreen rather than off-camera. Coming off the back of The Generation Game and Play Your Cards Right, Bruce’s star was certainly still shining but he was soon to enter the wilderness years, never more so than here (excepting perhaps the ‘Bruce rap’ he used to do at the end of You Bet).

Slinger’s Day is catastrophic in all respects. It’s 1986 but we are still treated to an avalanche of sexism, homophobia (all fruit-based jokes are catered for) and especially racism – the French are frogs, Germans are krauts and Vicky Licorish’s character, Pinter, ‘must‘ have come from where the latest shipment of kumquats have arrived from (honest) and – wait for it – doesn’t have a brother called Harold, does she? (cue Bruce gurning to camera). You know you’re in for trouble when there’s canned laughter (please God let it be canned) playing over the opening credits.

Bruce is the only name to speak of, save for head of security, David Kelly, who reprises almost to a tee his O’Reilly part in Fawlty Towers. The rest of the cast are utterly inept, the trying-too-hard assistant manager, dim lad-about-town, Bruce’s ex-loves, all making appearances in London’s smallest and most over-staffed supermarket. Episodes deal with the likes of the hilarities of shoplifting, an unfortunate overstock of fishcakes and a visit from Prince Charles and Princess Diana.

And so to Bruce. A dagger in the heart of his career, it took him years to shake off the eye-rolling, teeth-baring charade he puts us through here. Uncomfortable with the script, the cast and, seemingly, life itself by series 2 (the mere existence of which is hard to fathom), it’s both sad, ridiculous and tremendous to see Britain’s top star of the Seventies mouth moving as other actors say their lines. The episodes end with either preposterous freeze-frames of Bruce’s funniest bits or, best of all, Bruce continuing to gurn, his teak toupée spinning as he crashes through piles of tins and strains to prevent himself from hollering “Good game! Good game!” as the cast of guilty parties scrolls up the screen to the sounds of an audience laughing themselves to sleep.

The world being what it is, Slinger’s Day is now available to buy on DVD. Buy here

This piece originally appeared on the redoubtable Reprobate

All the Young Droogs – The Glory of Glam

Ahead of their 30th Anniversary, Who is The...